The Stephen and Rachel Cain Collection

The Stephen and Rachel Cain Collection is open for research.

Stephen P. Cain was born Sept. 29, 1901, in Dalton, N.Y. He grew up on May Street in Buffalo. He was a 1922 graduate of Canisius College, where he served as the first editor-in-chief of the college’s yearbook, The Azuwur. After graduating, he sought work as a reporter at one of Buffalo’s six newspapers at the time. Mr. Cain later wrote about his experiences as Canisius yearbook editor and his job hunt; these writings are in the collection. He described himself in this self-written 1968 biographical sketch: “Entered newspaper field after graduating in 1922 from Canisius College with a B.A. degree. Has been city editor, assistant city editor, political editor and columnist, Albany legislative correspondent, chief rewriter and reporter on Buffalo newspapers. In free lance field has credits innovational magazines — short fiction in Extension and old Street & Smith publications, True (factual) and Reader’s Digest, an original piece. Many articles on the local scene in the Buffalo Evening News Saturday Magazine.” Over the course of his newspaper and free-lance writing career, he wrote other biographies of himself, which are in the collection. They include: “Served as a publicity man, speech writer and statementeer in several Republican campaigns, working both out of organization headquarters in the Ellicott Square and with individual candidates. Have been associated with such outstanding Republicans as Walter Mahoney, Ray Lawley, Herm Grannis, Mike Catalano, Harold Becker, Ray Biondolillo, Joe Carroll, Bernie Bird and others,” and “City editor, political editor and columnist, rewrite man and reporter, Buffalo Evening and Sunday Times, Scripps-Howard. City editor and rewrite, Akron, Ohio, Times-Press, Scripps-Howard. City desk, rewrite, reporter, Buffalo Evening News. Reporter, political writer and Albany legislative correspondent, Buffalo Courier-Express. National credits include stories in True and an original article in Reader’s Digest. A few fiction stories in Extension Magazine and Street and Smith publications. Graduate of Canisius College, Class of 1922, with a degree of Bachelor of Arts. Member of DiGamma, Canisius Honor Society. … Wife, Mrs. Rachel King Cain, is in Who’s Who of American Women and society editor of the Buffalo Evening News … Prior to that, she wrote a society column for the Buffalo Evening News.” During his career, he met and reported on many well-known local, national and international personalities. He left reporting at an early age due to arthritis and turned his talents to free-lance writing. He wrote a fictional account of growing up in Buffalo, as well as several non-fiction pieces. He died Sept. 14, 1975, at age 74 in Buffalo.

Rachel King Cain was born Dec. 8, 1914, in the United States. She grew up in Williams, W. Va., where her father was a minister who married many couples in their coal-mining community. Her experiences attending and helping with weddings as a child influenced her reporting style and subjects later in her newspaper career. In the manuscript of her work titled “About Brides,” she wrote, “I was admonished very young never, in any way by word or action, to reveal to anyone outside of the home what took place inside. There were too many secrets, problems, joys and heartaches left by parishioners inside those four walls. I religiously abided by the rules and, in later years it was a distinct advantage in my newspaper career. People knew I would not break a confidence. I never did.” She later lived in Oswego, N.Y., and Utica, N.Y., before moving to Buffalo. Mrs. Cain described herself as a reporter, columnist and editor at the Buffalo Evening News. In her biographical material for her “About Brides” manuscript, she described her writing philosophy: “Part of my duties as a reporter, columnist and editor for more than four generations included the handling of engagements and weddings. Frequently, newspaperwomen prefer, what they consider, more exciting assignments. In thinking through this phase of my job I had a different perspective. When I realized that many years of my life were going to be spent on this bridal path I decided that here was a rare opportunity for me — a chance to be a part in helping thousands of people during one of the most important times of their lives. I became determined to do all I could to make it a happy time.” She covered social events and weddings on the local and national scene, including a trip to the White House for the marriage of President Lyndon Johnson’s daughter in the 1960s. “A newspaper account of a wedding is very special,” Mrs. Cain wrote. “For many it is the only time in their lives they’ll be able to read about themselves in print — and to read again and again as the clippings yellow with age over the years. I also wanted them, whenever possible, to have pleasant memories of their personal associations with a large metropolitan newspaper.” Mrs. Cain was affiliated with the Buffalo News for 40 years; she also did some free-lance writing. She died Feb. 3, 1992, at age 77 and is buried in Mount Calvary Cemetery, Cheektowaga, N.Y.

The Cains married in 1943. They lived in Buffalo on North Street for many years before moving to 33 E. Winspear Ave. in 1959. Stephen Cain’s family had owned the Winspear home since the early 1930s.

The Cain Collection consists of three boxes of short stories, manuscripts, drafts, programs, poetry, notes, newspaper clippings, photocopies of newspaper clippings and some miscellaneous material, such as press credentials. The manuscripts include fiction and non-fiction works. Some of the documents are typed and some are hand-written; many of the documents contain hand-written notes and revisions. Several manuscripts are represented more than once in the collection, with two, three and sometimes four versions of a work, which reflect the authors’ changes over time, title changes and word counts. Please see the collection finding-aid for additional information.

The Cain Collection contains 116 folders in three boxes. Box 1 has 58 folders. Box 2 as 19 folders. Box 3 has 39 folders. Some of the documents in the collection are in chronological order. 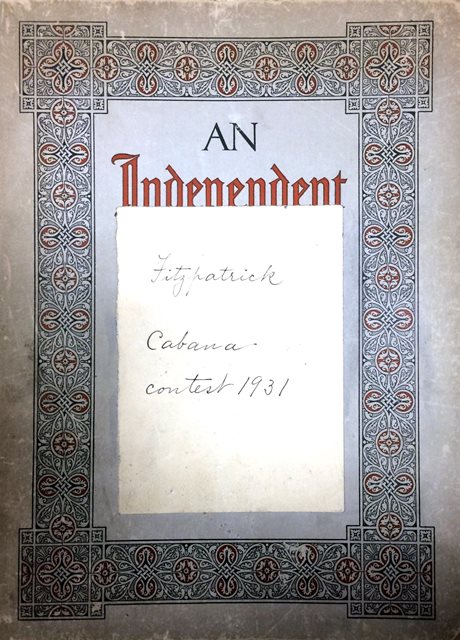 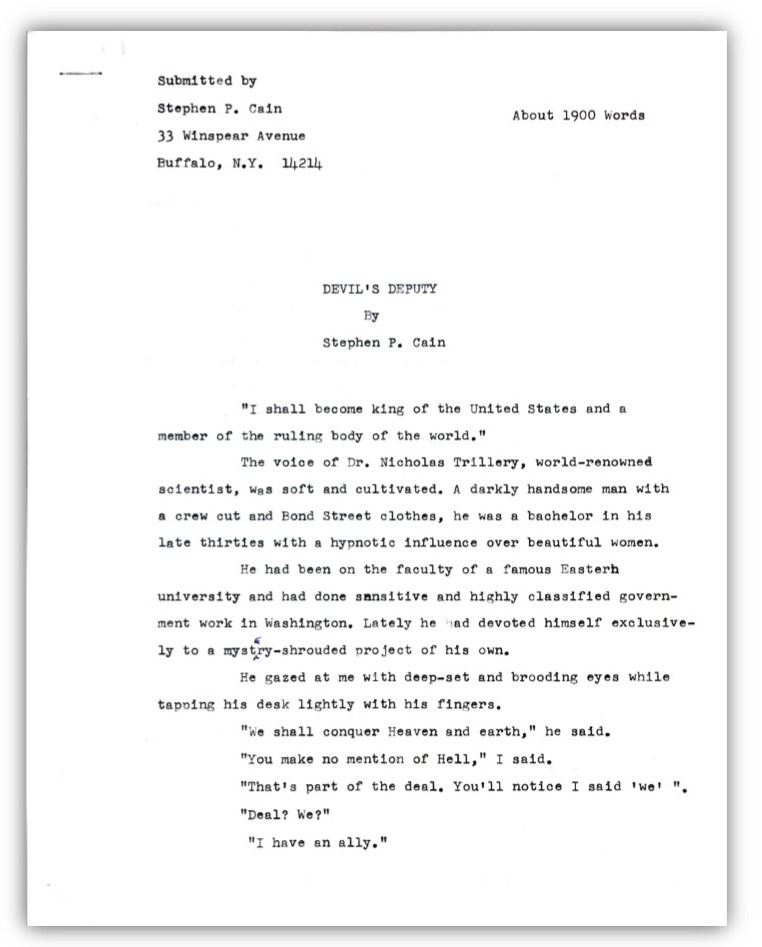