Lance Zavitz was a reporter, editor, church editor, columnist and self-described “commentator” at The Buffalo Evening News newspaper from 1933 to at least 1960. He wrote columns, editorials and book reviews. He also worked on the newspaper’s “church page,” and gave speeches/talks to community groups. Zavitz was born on March 28, 1899, and died Feb. 27, 1987 in Gerry, NY. He was a naturalized U.S. citizen who was born in Canada; at that time, he lived on Fishery Road in Cold Spring, Cattaraugus, N.Y., with his wife and four children. The U.S. City Directories 1821-1989 shows his profession in 1941 as a “rewriteman” for the Buffalo News who lived on LaFayette Avenue; in 1956, the directories show him as still working for the newspaper but now living on Leroy Avenue. Several records show he became a lay pastor and later minister of the Ellington Congregational Church in Ellington, N.Y., where he presided over funeral services. Town of Ellington, N.Y., sesquicentennial (1824-1974) records refer to him as having served as “pastor for 15 years” in 1959, when he “decided to become a part of the Billy Graham evangelist team.” Other references to Zavitz cite him as “Graham's news bureau chief” (a 1964 article in Harvard’s Crimson newspaper) and press agent (1965 article in the Lima, Ohio, News). Zavitz also is listed as a contributor to Christianity Today (June 24, 1966, Volume 10, Number 19).

The Lance Zavitz Radio Show Transcript Collection consists of one box of scripts that were delivered on WBEN Radio from 1934 to 1940, and one folder of miscellaneous correspondence to, from and about Mr. Zavitz. The correspondence dates from 1933 to 1953. The collection captures mid-depression attitudes on local, state, and national levels including commentary and seemingly prophetic analysis.

The scripts are for a show titled “The Week in Review.” The show name sometimes was changed to “The News in Review,” which may reflect the fact that some shows were delivered weekly, while other shows were two or three weeks apart. The scripts are arranged chronologically, with a start date of Jan. 6, 1935, and an end date of May 17, 1940. The show originally was broadcast on Sundays; it then was moved to Saturdays; and finally was moved back to Sundays. Also, the show’s length and time slot changed often. Show lengths were either 5 minutes, 10 minutes or 15 minutes. The show’s time slot ranged from 6:35 to 6:45 p.m. to as late as 10:30 to 10:45 p.m. Most of the shows were delivered on the radio station WEBR (1340 AM and later 970 AM), which went on the air in 1924. It was sold to the newspaper The Buffalo Evening News in 1936; The News then sold WEBR to competing newspaper the Buffalo Courier-Express in 1942. (More information on WEBR can be found at http://www.buffalobroadcasters.com/broadcast-history/WEBR-Radio-970/4.)

Shows from June 2, 1935, to mid-August 1936 were delivered on WBEN. WBEN was licensed by the The Buffalo Evening News and started broadcasting in 1930. The radio station’s studios were in the Statler Hotel; some of the Zavitz scripts are typed the back of letterhead from the station. (More information on WBEN can be found at http://en.wikipedia.org/wiki/WBEN_(AM)). Shows from Aug. 30, 1936, and on are listed as being delivered on WEBR.

The Lance Zavitz Collection contains one box of 225 folders arranged in chronological order. 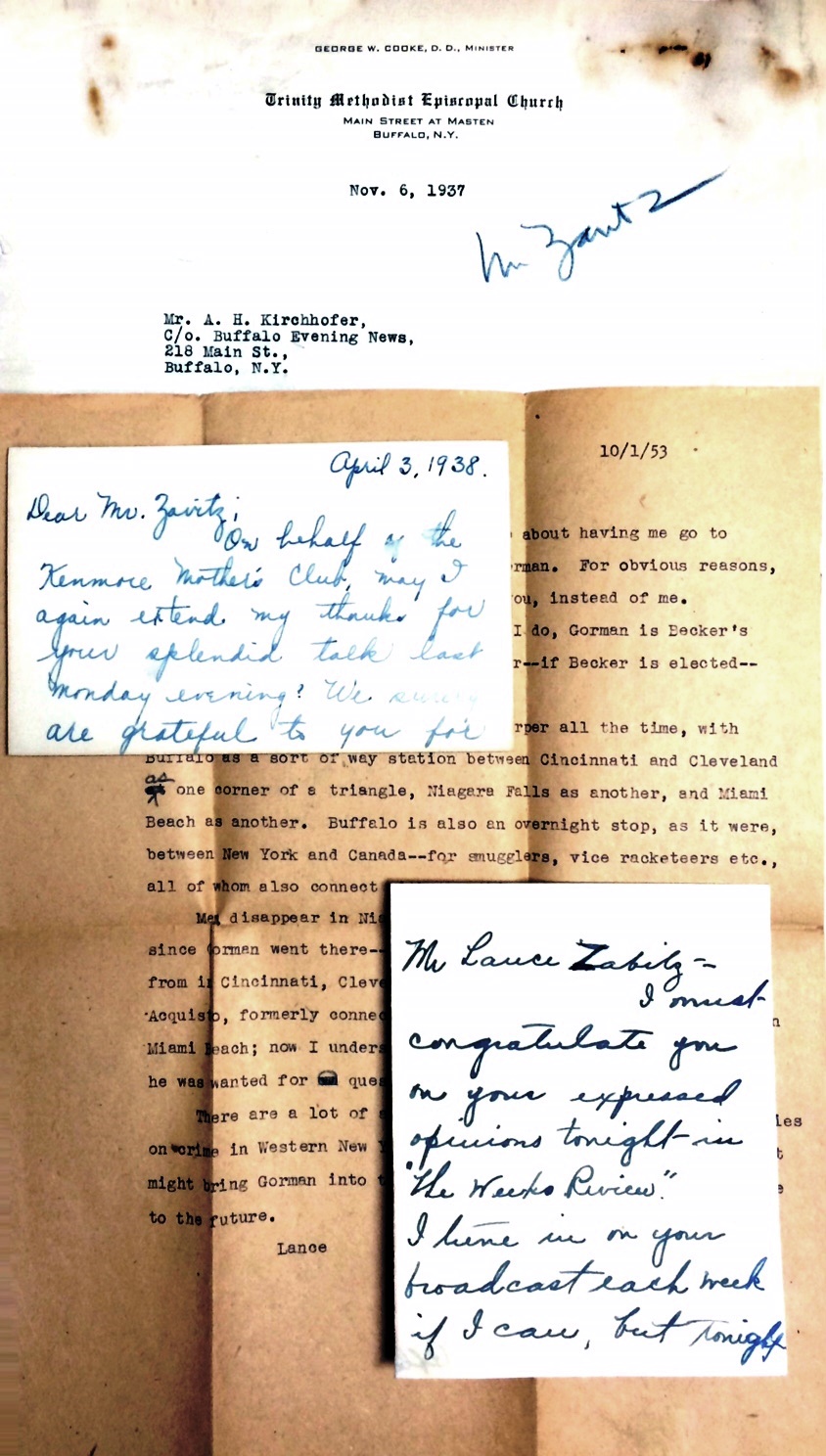