Access:
The Edison Street Baptist Church Papers Collection is open for research. Materials are only available on microfilm for access within the department. Appointment required.

Biographical Note:
Founded by Immigrants from the village of Pescasseroli, in Abruzzi, Italy, the Edison Street Baptist Church’s first Chapel was dedicated on 9/13/1896. Similar to other American Protestant churches, the house of worship was ‘plain & simple.’ Escaping religious persecution and social conditions in post-feudalism Italy, these first immigrants founded the country’s first Italian Baptist Church, which subsequently played a unique role within the growing Buffalo community. Ariel Bellondi was named the church’s first pastor, followed by Angelo Peruzzi (who is considered the church’s patriarch.) During the years 1912-1923, Pastor Giovannni Castellini oversaw many changes within/out the church. These changes included: digging a basement that served Sunday school classes, the addition of a new bell, the formation of the Women’s Union, and an increase in membership. In 1927, an Athletic Association was formed that included basketball, boxing, and wrestling.  Initially, morning services were given in Italian, followed by an English version.  On 4/18/1934, the First Italian Baptist Church formally changed its name to the Edison Street Baptist Church.  That same year it became necessary for the First Italian Baptist Church to incorporate under New York State.

In 1957, the congregation numbered 196 members. Following the dramatic influx of Italian immigrants during the early part of the 20th century, that number increased to 250 by 1966.  The female congregation was responsible for keeping up the church until the 1950’s when they hired a janitor.  Further, the Woman’s groups were helpful to children and the poor, and also helped arrange the communions. The popular ‘Spaghetti Dinner’ was also handled by female members until the men parishioners later took over the responsibilities. The Buffalo Board of Education leased temporary classroom space in the church from 1927-1932, until School #71 was completed. During its 40th anniversary in 1938, the Church’s congregation consisted of 70% Italian members. The same year, a fire broke out in the church destroying the organ and many of its records, though not one Sunday service was missed. Edison Street Church was known for reaching out to other ethnic groups of the same faith.  Edison also associated frequently with other local Baptist Churches, including youth and Advent groups, which served to widen its base.  In the mid 1950’s, Pastor Davey oversaw $75,000 worth of renovations.  Another accident, an explosion in the parsonage, further left gaps in the church’s history. The congregation opened their pockets to rebuild it.  1987 saw the church providing an after school childcare program for latchkey children in addition to becoming the toy distribution center for the Buffalo News.  In 1995, E. Darlene Williams took over pastor duties becoming the churches first African American leader, reflecting demographic changes in the neighborhood.

Edison Street Baptist Church : the first Italian Baptist church in the United States - a centennial history / by Graham Millar with the editorial assistance of Ernest Notar (1996) 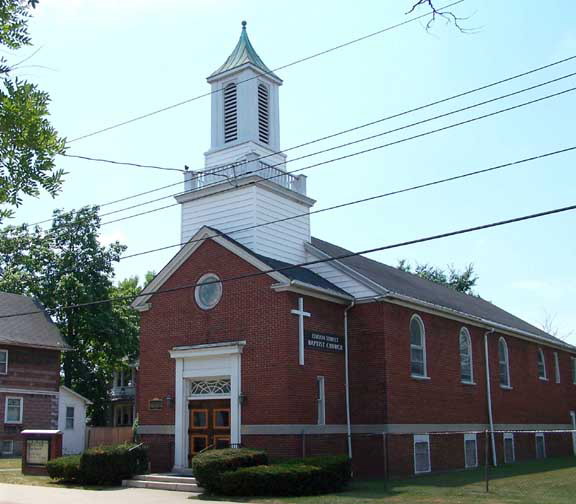