Records exist of early Universalist and Unitarian churches in Niagara County.  But the present First Unitarian Universalist Church of Niagara came into existence through the efforts of J. Allen Johnson, late of Niagara Falls, NY, and his associates.

On Dec. 30, 1913, on the letterhead of the Ontario Power Company, Mr. Johnson requests fellow engineer John W. Beckman to accompany the Rev. Richard W. Boynton of the First Unitarian Church of Buffalo to the Niagara Falls Odd Fellows Hall where Boynton was to preach on Jan. 4, 1914. A list of those possibly interested in a “liberal religion” had been compiled, and post cards were mailed advising them of the service.  This group met more or less regularly the next few years, moving around the city from the Christian Science Reading Room, the Odd Fellows Hall, Temple Beth El, to the Painters and Decorators Union Hall over the Gray & Trigg Monument shop at 910 Main St.

Speakers from other Unitarian churches and students from Meadville Theological School addressed the group.  Many of its members were former Universalists or belonged to a local debating club, the Junto.

The Rev. O. Bruce Swift, from Middletown, NY, became the church’s first minister, beginning his pastorate on March 6, 1920. Notices in the Niagara Falls newspaper announced that the church would be formally established on Oct. 17, 1920.  There were 34 charter members of the First Unitarian Church of Niagara Falls, NY.

Lacking a permanent home, the new church initially held services at the Gray & Trigg Building. With the assistance of the American Unitarian Association, the lot at 639 Main St. was purchased on Feb. 25, 1921.  Incorporation followed on April 10, and the AUA contributed $10,000 toward the construction costs of a building and held the deed to the land.

The unique church edifice was dedicated on Jan. 15, 1922. With its stone façade, flat roof, and front door flanked by four Doric columns, the exterior has not changed. The Niagara Falls Gazette reporter writes about “building upon the rock,” remarking: “The materials are stone, steel and concrete.  In excavating for the basement, it was found that the rock was a fine tough limestone that could be used in building the church itself.”

Dr. Swift corroborates this in a 1935 letter:  “The walls are of solid masonry which used the stone from the excavation. The trim [of Indiana sandstone] is the only foreign stone used.”

The interior of the sanctuary originally was more of a theater, “a stage of goodly size and furnished with a grand piano, formal chairs, and a…reading stand in lieu of a pulpit.  The stage may be used [and has been] for plays, entertainments and motion pictures,” says the Gazette. The basement, Unity Hall, was finally finished during 1925-26.  A group of members contributed the cost of the Bennett organ in 1928.

Natural light pours in through large clear glass windows on either side of the sanctuary, which is otherwise very simple and unadorned. Chairs rather than pews were the seating choice from 1922 onward, and the present seats are theater-style individual chairs, some of which are memorialized.

The church founders were hedging their bets with such an “unchurchly” building.  Dr. Swift says they wanted the option of selling it should the movement fail or if they could get a generous appreciated selling price and build “a churchly structure elsewhere.”

With part of the “Expansion Fund,” the church auditorium was remodeled in 1955. The stage was closed off, six classrooms were added for the church school (then at its zenith,) and the old debts to the AUA were paid off.  The Bruce Swift pulpit, Founders Room and Education rooms were rededicated on Oct. 17, 1955.

Rev. Robert B. Day        Oct. 1926-July 1945
The longest-serving minister, he was defeated in his run for the city’s mayoralty in 1939; the Board of Trustees urged him to refrain from seeking further political office.

The First Unitarian Universalist Church of Niagara has been involved in the Niagara Falls community since its inception.  At times it represented the lone liberal religious voice in the city and was considered very radical, supporting controversial viewpoints.

The congregation voted to join the merged Unitarian Universalist structure in 1960 and became known by its present name. From 1940 through the 1970’s the church’s annual Christmas Bazaar was a newsworthy local event.  The Women’s Alliance spent all year preparing crafts, food, and needlework to sell; the booths occupied the entire sanctuary.  The “church mice” toys are still remembered.

The Niagara Falls Little Theater presented plays in the auditorium, and lectures, movies, and concerts all have had their places over the years. A teen coffee house and Liberal Religious Youth were Vietnam-era activities.Ministers from the Rev. Engvall onward were involved with Planned Parenthood.  A wide variety of outside groups have met in the building:  Spiritualist Church, Christian Scientist Church, Recovery group, League of Women Voters, Habitat for Humanity, gays and lesbians, Alcoholics Anonymous, to name very few.

The number of members has risen and fallen along with the vicissitudes of Niagara Falls. During the Great Depression it fell. In the boom 1950’s the church was full of people with advanced college degrees and extra space was created for church school classes. Many of these folks either relocated or passed on. A new generation of Unitarian Universalists keeps the church going forward into the 21st century.

Click here to visit the online collection of the First Unitarian Church of Niagara Falls. 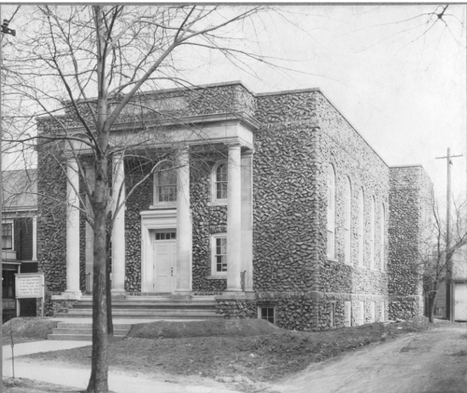