Freedom’s Journal was the first African American owned and operated newspaper in the United States. A weekly four column publication printed every Friday, Freedom’s Journal was founded by free born African Americans John Russwurm and Samuel Cornish on March 16, 1827 in New York City, New York. The newspaper contained both foreign and domestic news, editorials, biographies, births and deaths in the local African American community, and advertisements. Editorials deriding slavery, racial discrimination, and other injustices against African Americans were aimed at providing a counterweight to many of the white newspapers of the time period which openly supported slavery and racial bias.

Freedom’s Journal was not born solely out of the perceived need to defend African Americans as much as a desire within the black community to create a forum that would express their views and advocate for their causes.  Russwurm and Cornish placed great value on the need for reading and writing as keys to empowerment for the black population and they hoped a black newspaper would encourage literacy and intellectual development among African Americans.  Relatedly the newspaper sought to broaden its readers' awareness of world events and developments while simultaneously strengthening ties among black communities across the Northern United States.  Subscriptions were $3 per year and Freedom's Journal at its peak circulated in eleven states, the District of Columbia, Haiti, Europe, and Canada.

In September 1827 Russwurm became sole editor of Freedom's Journal following the resignation of Cornish over differences regarding African American colonization of Africa. Russwurm had begun to promote the colonization movement lead by the American Colonization Society which wanted to free African American slaves and offer them the opportunity of transport back to Africa. The paper's support of colonization, however, was unpopular with its readers and subscriptions began to decline.  With the loss of circulation in March 1829, Freedom's Journal was forced to cease publication.

Soon afterwards, John Russwurm decided to emigrate to Liberia, the area established on Africa's western coast to receive those recruited by the American Colonization Society.  Russwurm became governor of Liberia's Maryland Colony.  Samuel Cornish returned to publishing in 1829 and attempted to revive Freedom's Journal under a new name, The Rights of All.  The newspaper folded in less than a year. Despite its two-year lifespan, Freedom's Journal made an enormous impact on antebellum African American communities.  By the beginning of the American Civil War, three decades later, there were over 40 black-owned and operated newspapers throughout the United States

More information can be found at: http://www.blackpast.org/ 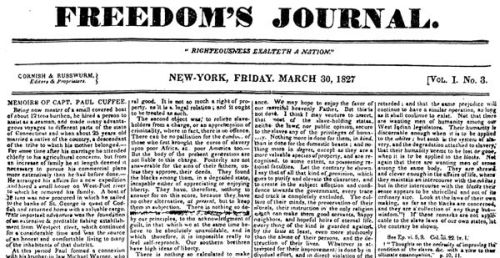 This newspaper is held on microfilm in the department and is part of the Monroe Fordham Regional History Center. The MFC is open to students, faculty, as well as the surrounding community. Please contact an Archivist to set up appointments and view materials.

The Wisconsin Historical Society has digitized the full run of Freedom's Journal from March 16, 1827 through March 28, 1829.