Biographical Note:
Beginning at the end of the 19th century, Polish immigrants began settling into Niagara Falls, NY.  Inspired to have a worship-site in their own language, local parishioners secured funds for the purchase of a property in the city’s East side. On May 27, 1902 the newly formed Roman Catholic Church was dedicated by Bishop Quigley. As membership increased, a larger house of worship became necessary. Constructed by the Braas Brothers Company Building Contractors, the church celebrated its first mass in the newly erected building in 1906. Holy Trinity Church features Romanesque Revival influences, and incorporates a school (subsequently closing in 1974) rectory, convent, and garage.  In 1964, Pastor Praczkajlo was able to pay off the church’s mortgage. Holy Trinity R. C. Society was formed on October 27, 1901 by 21 founding fathers, who were inspired to provide a worship site for their families in their native language - Polish. Rev. Peter Pitass, Assistant at St. Stanislaus Parish in Buffalo agreed to the proposal of organizing a new parish. The meeting was held at the hall of Jacob Pasek at Falls and 13th Streets.

On October 2, 1905, a contract was negotiated with Braas Brothers Company to build the new church. The total cost $34,700. Stone from the hydraulic canal was used to build the church. All of the building are made of this "locally grown stone". When the cornerstone was laid on May 26, 1906, more than half the church was finished. The first mass in the church was celebrated at midnight on Christmas Eve 1906.

The rectory, located next to the church, was also built by Braas Brothers Company in 1907. The "carriage house" (now the garage) was built in 1907. The convent, located directly behind the church, was built in 1910 and blessed on May 29 of that same year. It originally housed 12 Sisters from the Franciscan Order. The school, the youngest of the buildings, was completed in 1914. It taught children from grades Kindergarten through 8th grade.

The Parish was closed in 2002, but has been saved by a devoted group of volunteers that formed the nonprofit Niagara Heritage of Hope and Service, Inc. The grounds are now used for community events, concerts, thrift store and a history museum. Holy Trinity Church became listed on the National Register of Historic Places in 2010. 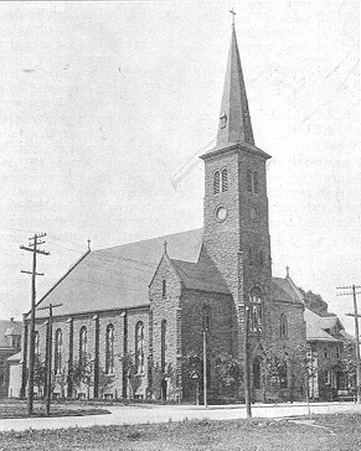