Access:
The Recorded Interviews of Milton Rogovin are open for research. Materials are only available on cassette tape for access within the department. Appointment required.

Biographical Note:
Milton Rogovin was born in New York City in 1909. He graduated from Columbia University in 1931 with a degree in optometry and a deep concern for the rights of the worker. He moved to Buffalo, New York, in 1938, where he established his own optometric practice in 1939. In 1942, he married Anne Snetsky. That same year, he purchased his first camera, and was inducted into the U.S. Army, where he served in England as an optometrist until 1945. Upon his discharge, he returned to his optometric practice and his growing family. By 1947, the Rogovin's had two daughters, Ellen and Paula, and a son, Mark.

Rogovin was called before the House Un-American Activities Committee in 1957. The Buffalo Evening News headline about his testimony named him "Buffalo's Top Red" and the persecution that followed significantly impacted his business and his family. Rogovin later stated that though his voice had been silenced, he would not be silenced. He demonstrated this in 1958 when he picked up his camera and began making images that communicated his deep desire for a more just and equal society. Rogovin later earned a Master of Arts in American Studies from the University of Buffalo in 1972, where he taught documentary photography until 1974.

Rogovin's lens has illuminated prominent social issues of the day: the plight of the miner in ten nations; the decline of the steel industry in Buffalo; the common struggle of the poor and working people living in Buffalo's Lower West Side; the celebration of spirit in the storefront churches of Buffalo; the pride of the people of Chile and the voice of its native son Pablo Neruda. Rogovin's sole purpose, as timeless as it is universal, is to help the viewer see the people in his photographs in a new light, as people of dignity and strength.

Throughout Milton Rogovin's career, his wife Anne was his collaborator, organizer and companion. Over the course of fifty years and across five continents, Anne worked alongside Milton in his photographic ventures while pursuing her own full-time career as a special education teacher, author, activist and mother. Anne's most valuable traits were her unassailable good nature and her diminutive appearance, which opened the doors of many homes that might ordinarily be wary of a man with a camera.

Milton and Anne Rogovin began their travels to Appalachia in 1962 to photograph miners and the communities where they lived. They returned nine times through the early 1980's. In addition to the miners of Appalachia, Milton also photographed Scottish and French miners. He received the coveted W. Eugene Smith Award for Documentary Photography in 1983, which enabled Milton and Anne to travel to China, Cuba, Czechoslovakia, Germany, Mexico, Spain, and Zimbabwe to continue the "Family of Miners" series.

Milton Rogovin's 100th birthday was celebrated with exhibits, new publications, films, awards and parties. His master collection of 3,500 photographs was placed at the Center for Creative Photography in Tucson, Arizona and 900 prints were added to the Rogovin Collection at the Burchfield Penney Art Center in Buffalo, New York. Milton Rogovin passed away on January 18, 2011 in Buffalo, NY.

The Monroe Fordham Center is fortunate be in possession of a number of interviews Milton Rogovin gave from the fall of 2003 to spring 2004. –taken from the Miltonrogovin.com official biography

Scope and Contents:
The interviews follow Rogovin's career from his work in Buffalo to his journeys throughout the world. All interviews were recorded on cassette tapes, with the hope of digitalizing them as an upcoming project.

Arrangement:
All interviews are listed by the day they were conducted and the accompanying subject. Each interview is on its own cassette tape. 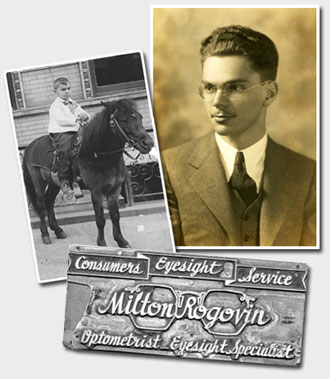