Access:
The St. Louis Roman Catholic Church Papers Collection is open for research. Materials are only available on microfilm for access within the department. Appointment required.

Biographical Note:
St. Louis parish was founded on January 5th, 1829 through the beneficence of Louis Stephen LeCouteulx de Caumont, a French nobleman, the first resident Catholic of Buffalo and agent of the Holland Land Company. In his New Year’s Gift to Bishop Jean Dubois of New York, LeCouteulx deeded land for the erection of a church, cemetery, school and priest house for all Catholics.

In 1831, Rev. John Nicolas Mertz, a missionary priest, arrived in the village of Buffalo, becoming the areas first resident priest. Fr. Mertz immediately set about organizing a school and the construction of a church. The new log church, hewn from logs in the nearby forests was named ” Lamb of God” after the depiction of the Lamb of God on a tabernacle door that Fr. Mertz brought with him from Europe. In 1836, St. John Neumann joined Fr. Mertz in ministering to the growing number of German speaking Catholics who had settled in the outlying villages surrounding Buffalo.

In 1838, seven men incorporated themselves under the laws of New York State into a Board of Trustees, thereby assuming the temporal affairs of the parish. In 1843 a larger brick church was built on the site of the log church by Rev. Alexander Pax. This new church was dedicated to St. Louis IX, the patron saint of Louis LeCouteulx.

After the death of LeCouteulx, a fierce rivalry between rival factions in the parish ensued. Disagreements between the trustees and Bishop John Hughes of New York resulted in the parish being placed under Interdict in 1843. This ended a year later. In the late 1840’s, disputes again broke out between the trustees and Bishop Timon resulting in the parish again being placed under Interdict. This second Interdict lasted until 1855. Time proved a great healer under the guidance of Rev. Joseph Sorg who became pastor in 1867. Highly esteemed by his parishioners, Fr. Sorg was given a final resting place in the Church Hall.

On March 25, 1885, fire broke out in the newly erected German American Music Hall across Edward Street. Due to high gusty winds, flames soon spread to the roof of the brick church. Despite valiant attempts by both parishioners and firemen, the church was totally destroyed. The fire claimed the lives of fireman George Roth and parishioner Joseph Grimm.

The next day, plans were set in motion for the construction of a new church in a grand continental gothic style. The first donation was made by Rev. Joseph Sorg and matched by parishioner and successful businessman Gerhard Lang. To assist in fundraising efforts, men of the parish organized the St. Louis Dramatic Circle, one of the nation’s earliest amateur theatrical groups which produced plays including the Shakespearean tragedy Hamlet.

Designed by the architectural firm of Schickel & Ditmar, the present church was richly adorned by local woodworkers and sculptors. The local firm of Riester & Frohe designed the windows in the nave clerestory and the Royal Munich Art Institute executed the sanctuary windows depicting the life of St. Louis IX of France. Our beautiful spire is the highest open laced spire in the United States and is a focal point of our city’s skyline. Our Kimball Organ was installed in 1903.

To celebrate our 175th anniversary, the parish completed a successful restoration of our beautiful church and the creation of a parish archives and museum. Through the dedicated effort of parishioners and friends, St. Louis Church has a bright and promising future and will continue to embrace the vision of our founder Louis LeCouteulx as a spiritual home for all Catholics. - By Michael A. Riester, Church Archivist

An additional history written by c. 1950 by Robert T. Bapst, Ph.D. can be found in the inventory. 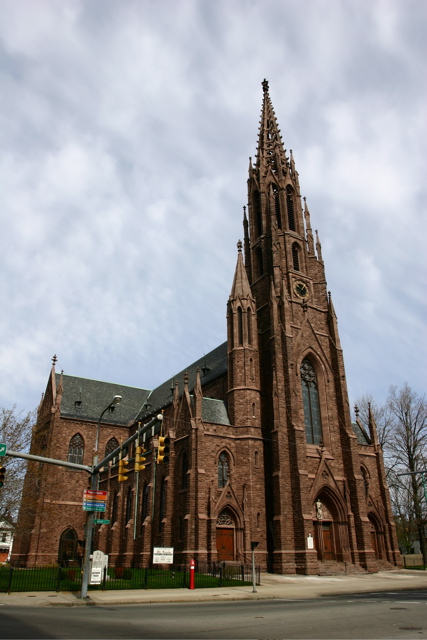