The origins of St. Peter’s Episcopal Church date back to 1823. It was during this year that the first Episcopal clergyman arrived in Niagara Falls, a place that had no official church services. It was this man, Rev. Hopkins from New Jersey, who began holding services in the town. However, Hopkins left during late 1823. The village of Niagara Falls did not have frequent service again until 1829. During 1828, three church denominations came together, the Episcopalians, Methodists, and Presbyterians, to build one place of worship that they would share in proportion to their respective contributions. General Whitney donated the land for a chapel in 1828. The land that Whitney donated was located on what is now First Street. It was also during this time that Samuel DeVeaux became involved with the church organization. He was elected to head the building drive for the new chapel. As the chapel was being constructed in January 1829, the parish was incorporated as the “Christ Church” with the elected Wardens Samuel DeVeaux and Samuel Hooker. The first official service in the chapel was held in the summer of 1829 and was conducted by Bishop John Henry Hobart.

Through the late 1830s, the parish began to diminish so much so that by 1839, the family of Samuel DeVeaux was the only family tied to regular services. However, in the 1840s, the population of Niagara Falls began to grow and there was an increased demand for regular church services. As the parish grew, DeVeaux began to garner support for a new Episcopal Church. It was during this time that the estate of General Peter Porter notified DeVeaux that they would be willing to donate property for the new church located between Falls and Niagara Streets.

In 1846, Bishop DeLancey proclaimed the charter of the Christ Church to be null and void because of its recent inactivity and also gave his consent to the organization and incorporation of a new Protestant Episcopal Church in Niagara Falls. This gave supporters the boost they needed to begin a new church. The new official name of the church, St. Peter’s, was suggested by Samuel DeVeaux for two reasons. The first was to honor Peter Porter for donating the land and for begin an important foundation of the new church, and the second was to honor St. Peter, the first organizer of the Christian Church. The church name was officially changed to St. Peter’s on December 31, 1846.

In 1847, the Vestry adopted the plans for a new church as drawn up by George Holley. Construction began and was not completed until 1849. During this time, the first service was held in the uncompleted chapel in 1848. The parish began to grow over the years and in 1852, the founder and leading benefactor of the church, Samuel DeVeaux passed away. The parish continued to move forward without DeVeaux and the chapel was officially consecrated in 1853 by Bishop DeLancey.

As the church became more stabilized, Civil War broke out. During the war, the church lost Peter A. Porter, one of the prominent members. In the 1860s, the church expanded services to include Sunday school and a private girls seminary. The parish vestry also had involvement with the DeVeaux School. After the Civil War, the village of Niagara Falls began to experience growth in population and industry. This also led to the parish expanding and beginning to examine the possibility of a new church. A committee was formed in 1871 to examine the building of a new church. D.J. Townsend was the chairman of the committee and Solon Whitney also served as a committeeman. In 1872, they presented their plans which included moving the church to a new property and also a design plan for the church by Henry Dudley.

Dudley, of New York City, was commissioned to design the church and laid it out in a Gothic Style. At the time, it was estimated the church would cost 36,000 dollars. Dudley was born in England and came to America after training. He designed 162 churches during the 1800s, alone and with various associates. These associates included Frank Wills and a short partnership with Frederick Diaper. Dudley was also one of the founding members of the American Institute of Architects. Dudley’s Gothic Revival architecture of St. Peter’s church is a prime example of the ecclesiological movement. This reform movement in church design wanted to return to the forms of the medieval church. It was thought that this architecture would help to revitalize spiritual interest. The church exemplifies this movement with the steep Gothic roof and the crenellated towers.

Construction of the church began in the summer of 1873 with the digging of the basement. The cornerstone was laid on May 5, 1873. While building the church, the parish fell into financial hardship because of the costs of construction and poor local economy. Church construction was completely finished in November of 1880, only a few months after the expected completion date. The first service was held on the 4th of the month, the same day that it was consecrated. The total cost of the church was approximately $47,000 with 7,000 of it being land costs. David Phillips and William Shepard built the church and it was their 130th church built. The interior decoration was done by P.C. Flynn. When the parish finished the church, they only had a small debt of 300 dollars and a mortgage.

The parish continued on into the late 1800s when they decided to build a guild house under Reverend Phillip Wheeler Mosher of Michigan. The guild house was built in 1901 under a joint agreement with the Jerauld Institute that allowed the institute and the parish to share the house.

A “Faith in Our Future” Fund Drive was launched in May of 1974, financed through special subscriptions, several capital improvements to the church proper, parish house and rectory were completed. Today, St. Peter’s is facing a declining population and a lower amount of income, which is making it difficult to maintain the church. They only have a small group of core families that continue to support the church.

Click here to visit the online collection of the St. Peter's Episcopal Church. 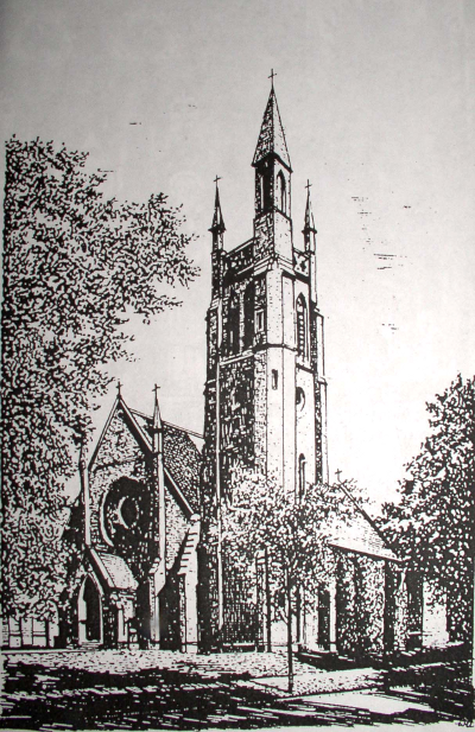