One of the most beautiful and imposing houses of worship in Niagara Falls is the Zion Evangelical Lutheran Church on Michigan Avenue at 10th Street. This church is not only one of the largest and most prolific in the city of the thundering Falls of Niagara but also one of the oldest. The congregation celebrated its golden jubilee in 1907.

The founder of the congregation was Pastor Johannes Althaus, who came to Niagara Falls in 1854 and held German services every second Sunday in the public schoolhouse at the corner of what is now 11th Street and Ontario Avenue. In 1856 the first steps to establish a church were taken and in the same year the building of the church began. One of the members, Mr. Christian Fink, undertook to build the church for $999.99. One man donated the lumber and another the stone. Full of courage and trust in God all members helped and in the autumn the little church was completed. All knew it was a primitive structure but the congregation was happy with their ownership of a house of worship.

As the congregation grew it became necessary to build a larger church. The church property at Michigan and 10th Street includes several community rooms, a gym and church offices as well as the massive church which is decorated with intricate hand carvings. Membership at Zion Lutheran had dwindled to about 150 members from over 1,000 when the church was thriving in the 1950s.  Zion Lutheran has also absorbed the former Bethany Lutheran Church located on Hyde Park and members from the First Presbyterian Church in Lewiston.

Click here to visit the online collection of the Zion Evangelical Lutheran Church. 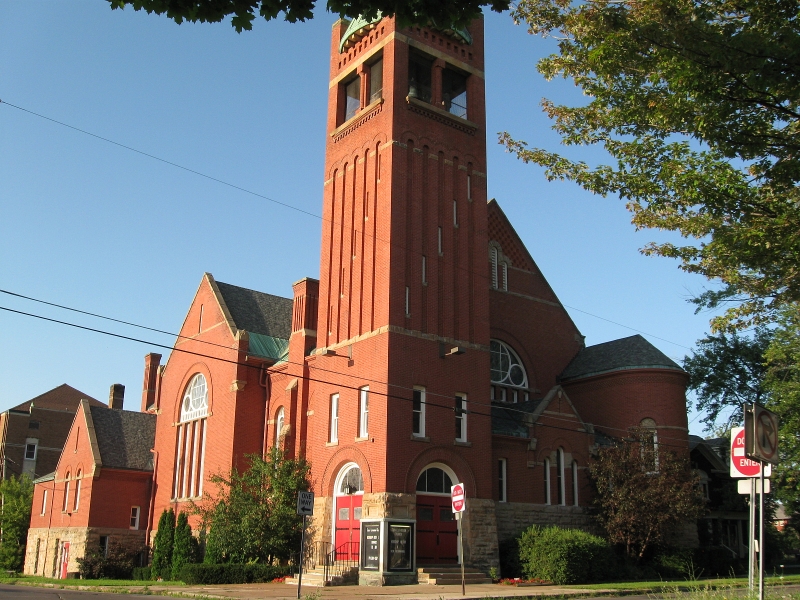